Western Kansas hunting gets much attention in videos and magazines. It is often overrated with expectations that are often disappointed. 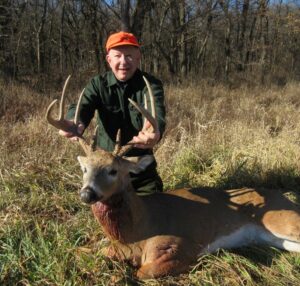 This Western Kansas hunting aerial is of the best looking habitat in western Kansas. It has yet to produce a tag-on of the biggest trophy whitetail. The largest trophies to date have been off of what is less good looking land from an aerial image perspective.

This is a quarter section. 1/2 x 1/2 mile square, 160 acres. A good piece of it true to anyone’s belief of what deer cover should be, woods. This lease holds one hunter at a time. 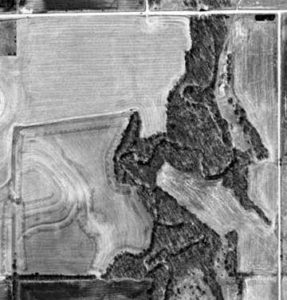 What looks good to the eye is not always the best. The spot below is such a case.  Where To Deer Hunt Is Where To Scout, do not scout it all.

If new to central mid-west habitat there is much to be ignored. Some to be scouted. The Association does have too much hunting lease land scout it all. This aerial illustrates this point.

The first year Association hunter will receive from us a farm listing of recommended starting spots. We also assist with other than first year members that are breaking into a new region.

That hunter then draws down his own aerial pictures from his own favorite aerial web site. We do not provide aerial images. Hunters have their own and unique perspectives on the aerials. We will not attempt to play secretary and satisfy the various hunters.

The hunter then starts a priority of first to last farm he wants to walk, glass or drive by. Then he marks those parts of the aerial that should be foot scouted. This is the time savings measure to insure the time spent on the lease is well used. No ATV scouting.

The aerial illustrates for us two key terrain features that assist with narrowing down where on any farm to foot scout. That is shown on the image below. On that lease little time should be spent anywhere direct observation from the three farm yards or roads is possible. Those remaining spots are where the deer and sign will be most prevalent. In this open country deer seek to not be seen and not see humans. Land contour is the deer’s best friend.

The area contained in the yellow lines can be seen from roads and farm yards.

Effectively used scouting time will be first to land outside of the yellow areas. 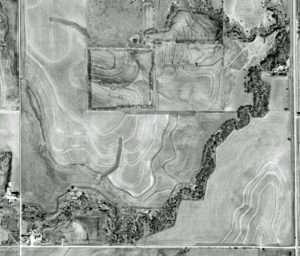 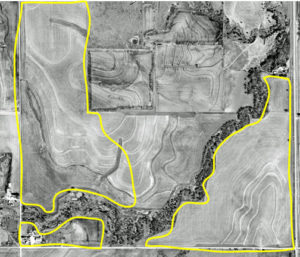 Pastures included. To further narrow down scouting spots avoid direct observation land from pastures. Most cattlemen will check cattle every day or two. That bit of human occupation is enough to modify deer patterns.

Find year round water sources near or better within those isolated areas. Deer will drink every day. Having water nearby makes a more likely loafing spot.

Then evaluate/predict during the hunting season what the food sources will be. A no-till grain field is better than clean till. Corn is better than soybean, milo is always good. Winter wheat is best during late season.

Tall or native grass bedding areas are a bonus. A quote from a seasoned Association bow hunter is that 30 acres of native grass beats 100 acres in timber anytime.

Each hunter should come out here with more land wanting to scout than time available. It is through this process that handful of farms most wanted to hunt are the most quickly identified.

Plan up a two hour minimum (more likely 4) scouting time period per 1/4 section (160 acres). Then repeat the next season covering past scouted or hunted farms and add some new ones to the knowledge bank.

Ground images from the land in the aerials above.

Inside the dry drainage, looking along the length of it.

This is a typical dry Kansas drainage. What is also useful to note is that our trees grow out with branches as much as up. A lock on stand is far more useful with steps or ladder sections than a climber.

The morning shrouded in fog making for dark pictures.

This lease was a bit different as there is a strip between the elevated farm fields and drainage. This allowed for much concealed movement of deer. A large Rio Grande Turkey flock was also present. We suspect the mixed weed and grassed slope provided nesting for the Rios. That is a good sign as Rios would not put up with much human pressure 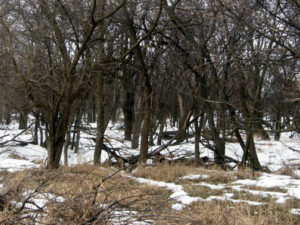 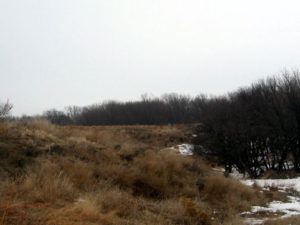